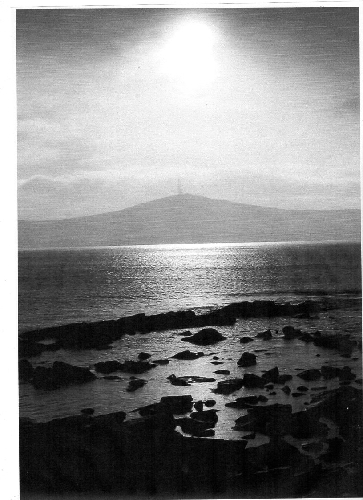 e middle of the Covid-19 lockdown, I was delighted to receive the music for a new 6-part strathspey from my extremely talented bagpiing friend Janette Montague.  The tune is called Arran of Bressay.  What does that mean, I hear you ask. Most Scots know the large Island of Arran of the Ayrshire coast.  But no, this tune does not refer to that ,even though Janette can see that magnificant island almost from her bedroom window.

Janette named the tune after a young man, Arran, who was in our class in one of the National Piping Summer Schools some years ago.

Arran was brought up in the small Shetland Island of Bressay (pronounced Bressa by the locals).  This latter fact, I found out from my friend Ian, who used to work for the Ordnance Survey all around Scotland, when I told him about the new tune. And not to my surprise, Ian even had a very evocative photo of Bressay taken from Lerwick one misty morning.


It is a great tune!  I would class it as moderately challenging but it was such a pleasure to learn it.  As can be seen, I subsequently played it at my front gate one evening as part of the "Clap for carers", when the whole nation came together to show its gratitude for the people working  in the NHS.

Janette has done wonderful things for the piping world as I recount on another page.